Although it wasn’t until 1965 that the term probiotics was coined, Russian scientist and Nobel laureate Elie Metchnikoff first introduced the concept of using beneficial gut bacteria to displace harmful bacteria and confer health benefits over a century ago.  But, as anybody who has recently watched television late at night can attest, probiotics are just now entering the mainstream.  However, don’t dismiss these helpful microbes as the latest marketing gimmick or fad.  Recent scientific research suggests that living active cultures of these friendly bacteria can indeed help prevent and treat an increasingly growing number of ailments.

For many people, probiotics conjures up visions of yogurt.  However, there are many other sources of probiotics including:

So just what can probiotics help you with?

Each of us has over 1,000 different types of bacteria that live in our digestive tract.  These gut bacteria help us to break down the food we eat and absorb their nutrients. However, when we take antibiotics — medicine that is intended to destroy bad, illness-causing bacteria — helpful good bacteria can be destroyed as well. Although antibiotics should be taken when prescribed by a licensed medical professional, there may be side effects. Diarrhea is one such common side effect.  A study in the Journal of the American Medical Association noted that about 30% of patients reported suffering from diarrhea or some other form of digestive tract distress [1].  The study found that taking probiotics to repopulate the digestive tract with healthy bacteria was a possible solution.  Several other studies have shown that taking probiotics prior to and while taking antibiotics can lower the risk of diarrhea associated with antibiotics [2] [3].

Probiotics can help with other types of digestive issues as well.  New research has indicates that probiotics may be helpful for people suffering from irritable bowel syndrome (IBS). This hard to treat condition has a wide range of intestinal symptoms including cramps, bloating, diarrhea, constipation and abdominal pain. Several studies have shown that patients receiving probiotics supplements containing a type of bacteria known as Bifidobacterium infantis experienced some alleviation of symptoms including abdominal pain and irregularity. According to a summary study, “there is growing evidence that B. infantis is becoming the frontrunner for treatment of IBS” [4]. One of the best selling and most recommended probiotic supplements containing a pure B. infantis strain is Align Bifantis.

Even when there isn’t an frequent or chronic problem, probiotics can play a helpful role with overall digestive health and management. Good bacteria help crowd out bad bacteria from getting a foothold. If places where bacteria live in your gut are filled up with the good guys, there’s no place left for the harmful bacteria to attach to.

One of the surprising benefits of good bacteria is an improved immune response.  Eating foods that are rich in probiotic bacteria helps maintain a good mix of helpful gut flora. “The gut is the largest immune organ in the body, accounting for 25% of the immune cells in the body that provide 50% of the body’s immune response,” according to Tufts University Director of the USDA Research Center on Aging and the Nutritional Immunology Laboratory Simin Meydani, PhD [5].

Scientific evidence is growing to further support probiotics’ role in the health of immune systems. In a randomized, double-blind Swedish study, over 250 healthy workers received either a daily dose of probiotic L reuteri or placebo for 80 days. For those receiving the placebo, 26.4% reported sick leave during the study compared with only 10.6% in the group receiving probiotics [6]. Both Microbiome Plus Gastrointestinal Probotic and Hyperbiotics Daily Immune and Wellness Formula are good sources of L. reuteri if this is a concern for you.

Gut flora plays a role in overall body weight.  A 2006 Washington University medical school study indicated that people with too much weight had a different mix of gut bacteria than people of normal weight [7].  Additional research shows that probiotics may help obese people who have received weight loss surgery, such as gastric bypass, to maintain the weight loss [8]. In women who have recently given birth, the addition of probiotics such as lactobacillus and bifidobacterium capsules reduced abdominal belly fat and helped reduce waist circumference.

Even through there is evidence that probiotics can assist with weight loss, there are still some questions as to exactly how probiotic weight loss occurs and what the significance of this is.  Still, since probiotic supplements are low in calories and are otherwise healthy, it is a harmless method to try. 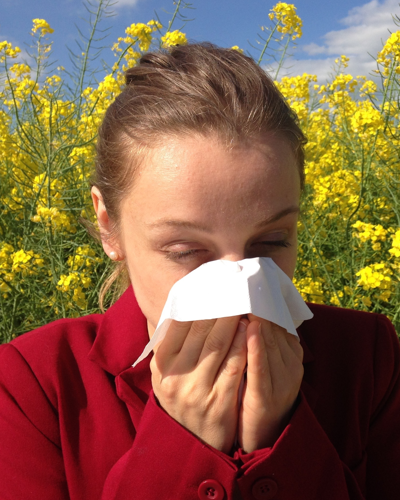 Scientists are just scratching the surface on what probiotics can do with regards to allergies. One large, well designed study found a significantly reduced risk of childhood eczema (a common indicator of allergies) in infants born to moms taking Lactobacillus probiotics during pregnancy [9].

Symptoms of respiratory allergies, which are often caused by mold, pet dander, or dust can be improved through the use of probiotics. A 2009 study found that using a combination of two probiotics found in H2PRO’s Immune Health probiotic (Lactobacillus acidophilus and Bifidobacterium latis) resulted in reduction of reported nasal symptoms [10].

Seasonal allergies, which cause symptoms such as sneezing, stuffy or runny nose, and itchy or watery eyes, are estimated to effect approximately 50 million Americans.  Seasonal allergy sufferers who ate probiotics showed an improvement in at least one outcome measure according to a recent meta study [11]. These outcome measures included reduction in symptoms and improvement in general quality of life. The study did, however, note that further research is needed to establish appropriate medical recommendations. Therefore, probiotics should be used to supplement, rather than replace, existing traditional allergy treatments.

Much like the digestive health, vaginal health revolves around a mix of good and bad bacteria. Beneficial bacteria are normally plentiful in the vagina. However when the balance is off, the result can be a thoroughly uncomfortable problem; a yeast infection or bacterial vaginosis. The most common types of good bacteria in this part of the body are Lactobacillus acidophilius and Bacillus coagulans.  Both of these bacteria produce high levels of lactic acid. This helps keep the pH level of the vagina slightly acidic. This is vitally important for women’s health because yeast and other bad bacteria having a hard time thriving in acidic environments. Research shows that bacteria reach vaginal areas by migrating out of the body from the digestive tract [12]. Consuming probiotics that contain at least one of these bacteria, such as NatureWise’s Woman’s Care probiotic, may be beneficial if women’s health is of concern to you.

Urinary Tract Infections (UTIs) are exceptionally common. This is especially true for women. The standard of care for treatment of these infections is, and continues to be, antibiotics. However, according to literature from the University of Maryland as many as 25 to 50 percent of infections return. Probiotics can provide a nice supplement to antibiotics.

Increasingly research is showing that regular consumption of probiotics help prevent bad bacteria from re-invading the urinary tract. Evidence from the available studies indicates that probiotics are beneficial for preventing recurring UTIs. Lactobacillus rhamnosus and L. reuteri are some of the effective strains for doing this [13]. Use of probiotics containing these strains, such as Garden of Life Urinary Tract Health probiotic, may be prudent for reducing the likelihood of getting a recurrent UTI.

Have you incorporated Probiotics into your diet? What has been your experience? Share your comments below!

This site uses Akismet to reduce spam. Learn how your comment data is processed.